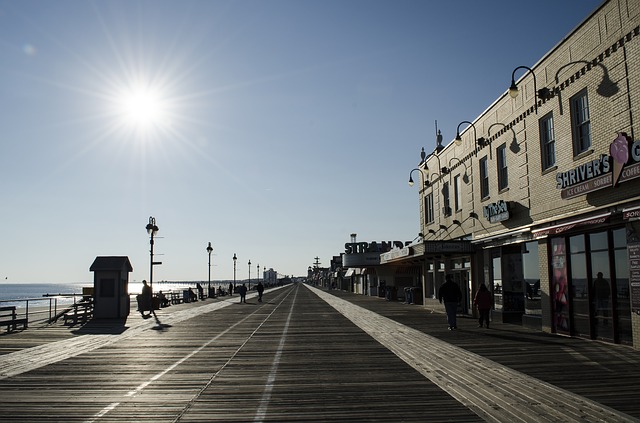 In past posts, we have taken a closer look at the origins of the Las Vegas strip, how the city as evolved and its contributions to art and architecture. For this post, we are turning to America’s other famous gambling hub and diving into the history of Atlantic City. While gambling in the city wasn’t legalized until 1976, the city has a rich history that has helped shape the town we now know. Taking a look at the past may also provide some insights into the future of the city.

In 1853, when Las Vegas was still a desolate stretch of desert, developers were recognizing the potential of Atlantic City. The city sits along the coast of the Atlantic Ocean and is surrounded by islands, making it the perfect place to build a resort town. The Belloe House was the first hotel to be built and within a year, the town had been incorporated and began receiving trains. Soon, nearly 500,000 visitors were heading to the city to escape New York City and enjoy the supposed health benefits of ocean water and clean air.

Much of the city’s PR and branding was spearheaded by Dr. Jonathan Pitney, who came to be know as the “Father of Atlantic City.” By touting the town as a health resort, he was able to boost tourism. In fact, he was responsible for the construction of the United States Hotel, which boasted 600 rooms and 14 acres of ground, making it the largest hotel in the country at the time.

By 1870, the first boardwalk was installed. While the boardwalk would eventually become a permanent feature and an iconic part of the city, these early versions were torn down at the end of the season. Their main purpose was to help keep sand out of hotel lobbies.

As the century came to an end, the city continued to gain in popularity. Eventually a toll road and second railroad were added to accommodate the influx of traffic. Smaller boarding houses began to be built. Despite all the construction, the city maintained a sense of luxury that attracted the rich and influential.

The Heyday of Atlantic City

Atlantic City has gone through several periods of revival, but the biggest boom time occurred at the turn of the century. Dozens of new hotels, including the famous Marlborough-Blenheim and Traymore Hotels were built and the 24 story Claridge hotel became known as the “Skyscraper by the Sea.”

During Prohibition, when other cities were cracking down on alcohol, the Atlantic City police and local officials turned a blind eye as liquor was smuggled into the city. Visitors could easily visit restaurants and nightclubs and grab a drink. Organized crime became such a big part of the city that they actually held a national conference there in 1929. It was also around this time that the city served as the inspiration for the first version of Monopoly, which still features the street and railroad names of the city.

After Prohibition, the nightclub scene flourished, but the city as a whole began to decline. More people owned automobiles and were able to come for a few days without having to stay for a week or more at a time. This new found mobility also meant that tourists could easily explore other cities along the coast and around the country without having to rely on the railroad. Commercial airlines also made travel easier and had people flying to tropical destinations like the Bahamas instead of hopping the train to Atlantic City. Finally, the emergence of suburbia and a healthy middle class meant that more families were building luxurious homes with swimming pools. This afforded people to enjoy the summer at home rather than spending money on an ocean side resort.

By the end of the 1960s, the city was trying to find new uses for hotels that weren’t in demand. These once popular and luxurious buildings were converted into nursing homes and apartments or simply demolished. In 1974, the city voted on a referendum to legalize gambling, but it failed. By 1976, residents had changed their collective mind and decided that gambling might just be the key to breathing new life into a crumbling city. Eventually, a total of 11 casinos were built and these locations began hosting big name boxing matches that brought in national attention.

Unfortunately, the Great Recession, which hit the US in the late 2000s, put a stop to a list of major construction projects that were already in the works and expected to bring even more business and big names like Steve Wynn into the area. Even as the rest of the country began to recover from the economic downturn, Atlantic City struggled to find funding for half finished projects and the state continued to lose revenue from gambling. Governor Chris Christie went against public sentiment in 2010 and offered Revel Entertainment Group $261 million in tax credits to finish building the revel casino. Within just ten months of opening the casino was forced to file for bankruptcy.

While Atlantic City continues to feel increased pressure as more surrounding states legalize gambling, the city has been making major strides. They were one of the first states to legalize sports gambling, giving them a leg up on the competition. Major casinos have also undergone renovations in order to cater to a new audience and revenue numbers are up almost across the board. There are more family friendly attractions, helping to revive the resort feel that once made the city a destination. With new projects on the horizon, the future is looking bright and Atlantic City could experience another historic and definitive resurgence. To stay on top of the latest casino and gambling news, be sure to keep visiting the Casino Schedule Ease blog.